Glossybox Canada had a bit of a glitch getting their March boxes out last month. They ended up sending them in the final days of March and many subscribers did not receive their box until April. When Glossybox started out in February, they stated that their boxes would ship at the beginning of every month, but they have now changed their website to state that the boxes will ship mid-month. In March, Glossybox was excellent at letting its customers know about the delays- they were having issues with one of the products getting through customs in a timely manner. They informed everyone via Facebook that the boxes were delayed due to customs issues, and they awarded everyone 250 glossydots as a way of apologizing.
Unfortunately, Glossybox is shipping out late again this month, and they have been less forth-coming when it comes to communication as to why. I have taken some screen shots from their Facebook page: 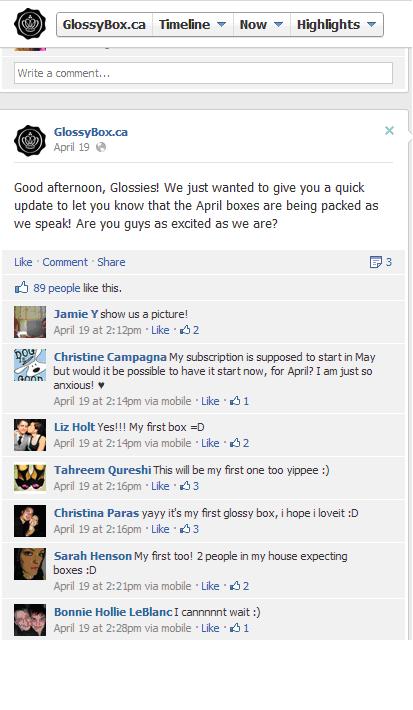 It looked like things were on track for a timely mid-month departure on April 19th when Glossybox updated stating that the boxes were being packed "as we speak". Everyone was obviously excited about this, as you can tell by the happy comments from subscribers. 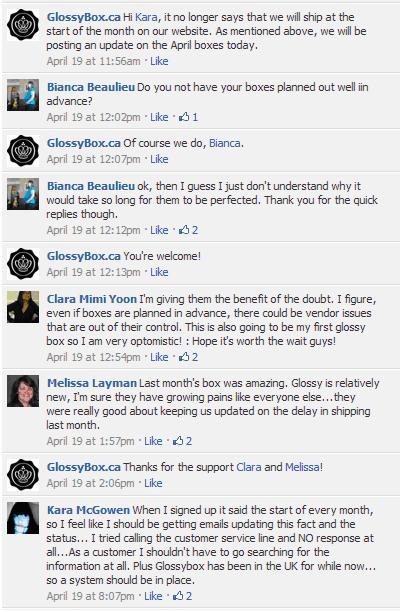 Of course, there were still people complaining on April 19th that they wanted a 'shipping date' for the boxes. You can read Glossyboxes response to people questioning their methods of planning ahead of time for boxes to be shipped in a timely manner. Topbox, for example, is already packing its MAY boxes, whereas Glossybox has yet to even send out a single box for April. Please note that  the above thread has since been deleted by Glossybox from their facebook page! The censoring is a little concerning. 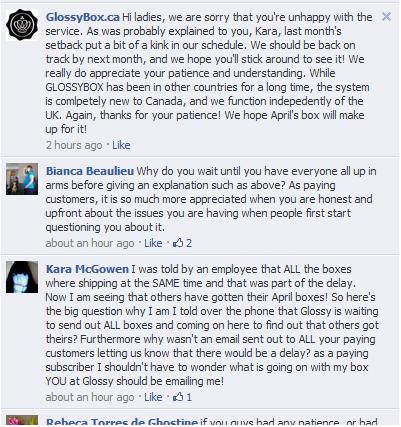 On April 23rd, there are more complaints from subscribers, and Glossybox once again states that last months setback put a kink in their schedule, and they are behind because of it. However, please note that these threads have since been deleted by Glossybox from their facebook page! 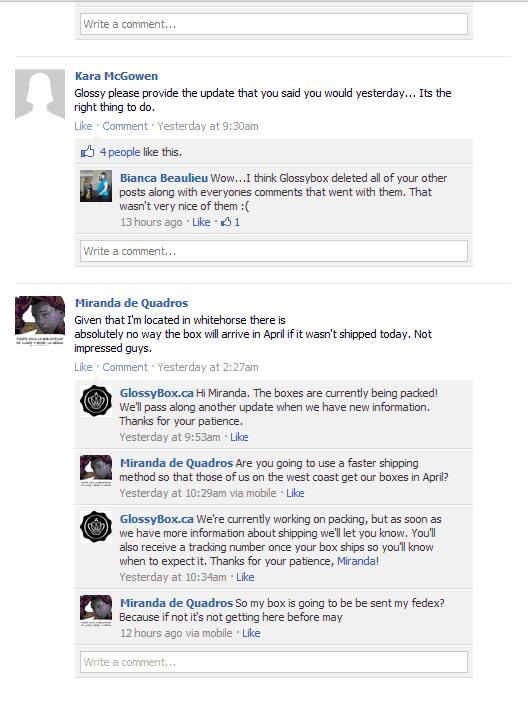 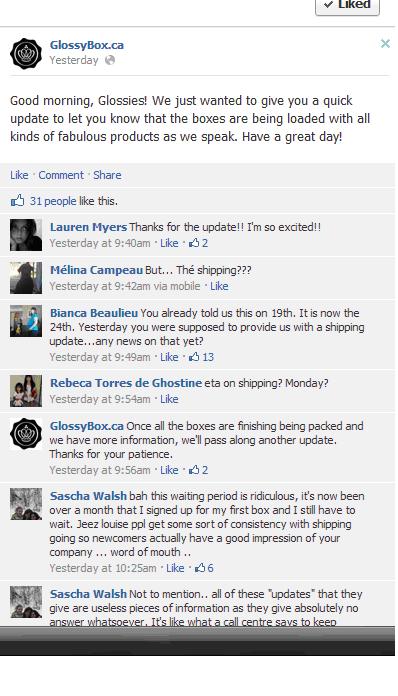 On April 24th, Glossybox sent out a near identical post to its April 19th post, once again saying the boxes were being packed "as we speak". This has frustrated many people who feel like Glossybox isn't being very forthright about what is actually going on. Why are the boxes so late this month again? They say last months box put them behind for this month, yet they also stated in a now deleted post that they plan their boxes well out in advance! Just as with last month, many Glossybox subscribers will not receive their April box in April.
Luckily for me, my topbox subscription is finally starting up for May! I have already paid for Aprils Glossybox and I get one free next month, but after that I think I will be cancelling.
I really do hope that the products are worth the wait, but the lack of real information about the delay is frustrating and the censoring on Glossybox Canada's facebook page is shameful!
Do you subscribe to Glossybox? What are your thoughts?

Email ThisBlogThis!Share to TwitterShare to FacebookShare to Pinterest
Labels: glossybox