I recently had a haul come in from LUSH, and I grabbed some things from their new Emotional Brilliance line. The first review I will be doing for LUSH Cosmetics new line of makeup will be on their skin tint called Feeling Younger ($18.95/20g). This product is made without mineral oil, and is 100% vegan! This product is suggested to be mixed with your foundation or tinted moisturizer to add a gorgeous glow to the entire face, but I have been using it as a highlighter in the same fashion as I use Benefit high beam. Feeling Younger is made with oatmeal, cocoa butter, jojoba and almond oils. It has light reflecting pigments meant to brighten the skin and camouflage flaws. 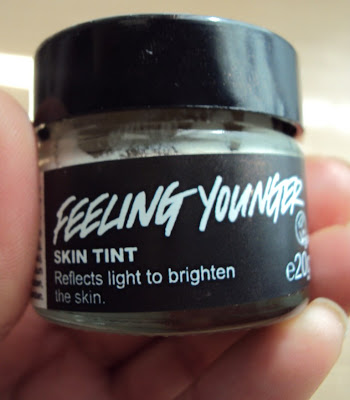 I have been wearing this product for the past week and it works just as well as Benefit's high beam. I would say the highlighting effect is on par with high beam, and I'd be hard pressed to notice much difference between them once applied to the face. I swatched them both side by side, as you can see below. High beam is slightly more pink, where Feeling Younger is more champagne. However, when blended they look identical. The wear time on Feeling Younger is fabulous, and I love the fact that this product is buildable, so if you want a tiny bit of glow, you can achieve that, but if you want more dramatic glow, you simply layer the product a bit heavier and blend it for a more intense look.
Price-wise, LUSH's highlighter is considerably cheaper than benefits, and it is made with higher quality ingredients. The lasting power and luminosity of both highlighters is identical in my opinion, so I will definitely be using LUSH's Feeling Younger in the future and save myself some major cash! In case you're interested, Benefit's high beam is $30.00/12 g where LUSH's Feeling Younger is $18.95/20g!!
LUSH also sells a bronzing skin tint, called Charisma, which could be a parallel to Benefits sun beam. I will do a swatch comparison on these two highlighting bronzers soon!!
--S
Posted by Canadian Beauty at 8/12/2012