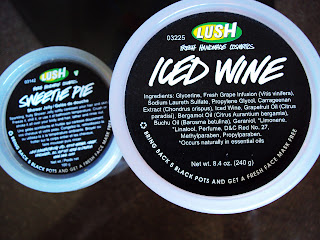 My most recent post mentioned that I used up a pot of LUSH sweetie pie shower jelly, and lots of you commented, asking about it! So I thought I would make a little post dedicated to these wobbly little things.
LUSH released their first shower jellies in 2005 to celebrate LUSH's 10th birthday! They were marketed as a soap that could travel easily and be used when frozen for extra refreshing showers.
Shower jellies are basically like Jello, except they're soap! They're made with seaweed for extra softening properties. I own two currently, Iced Wine, which sort of smells like fruit punch, and Sweetie Pie, which smells like black currants! Sweetie Pie also has pretty glitters in it.

Shower jellies are very economical- a little goes a very long way! There are a few ways you can use a shower jelly. Some people freeze them, and then take the whole thing into the shower and use it like you might a bar soap. Others take a pinch of it, and rub it quickly between their hands to make a rich lather. I personally prefer to take a bit of it and smoosh it into my shower puff, which creates loads of yummy scented bubbles. You really only need a tiny bit of it to create lots of bubbles, which is why it lasts so long! LUSH even states that you can use it as a shampoo, as it is very moisturizing. I do not find the glitter from Sweetie Pie to stick to the skin, which is a plus! I like to look at glitter, but don't necessarily want to be covered in it on the daily. The scent does linger nicely, however. 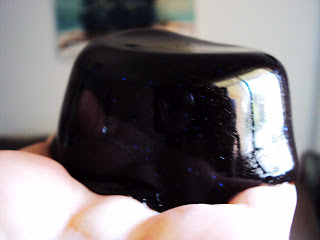 As you can see in the above photos, Sweetie Pie is very gorgeous to look at! Almost as pretty as the midnight sky, and it smells amazingly delicious! Mine is missing a chunk already, as I cut some off to use in the shower. 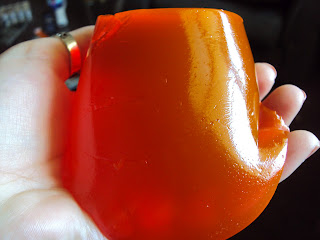 Shower Jellies come in two sizes, 100 g ($5.95) and 240 g ($10.95). This is a very reasonable price, especially if you compare it to the cost of LUSH bar soaps!
I think this product would be a huge hit for children, and it also would make a very unique gift idea! Mother's day is just around the corner, after all! There are other scents of shower jelly too, you can currently purchase the invigorating Party On shower jelly, and the citrus-y Whoosh shower jelly alongside Sweetie Pie.
--S
Posted by Canadian Beauty at 5/02/2012